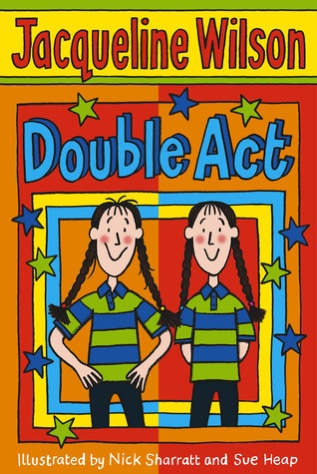 Hello everyone! It has been a long time, hasn’t it? Well, I’m back! Do you like being twins with someone, or do you have a twin? Then this book is good for you!

Ruby and Garnet are twins and best friends forever. Garnet is the shy kind while Ruby talks a lot. And they both do everything together. Ruby decides for both of them. One day, their dad meets someone named Rose and he decides to remarry (Garnets and Ruby’s mom died when they were both together)  and he marries Rose. They have to move away to a village and say bye bye to their grandma. They both go to the village, and they hate it there. They also hate Rose, which is hard, since they have to live with her. One day, while they both were making twin cookies, they saw a flyer for auditing for twins. When their dad says no to drive them to the auditioning place in another state, they both sneak out to go and audition. Their dad figures where they both were going and the audition place, he ruins the chance for them to be on TV. But luckily they find out the place where the people are filming the show and make a plan to attend that school which is an all-girls school. Their dad agrees and they both go to the scholarship test, and there is only one scholarship available so only one of them can attend the school. A few days after they both wrote their tests for the scholarship, they got a letter that Garnet has been accepted at that school. Ruby gets mad and stops talking to Garnet. She doesn’t do the same things they both do. They both have to make up before Garnet goes to the boarding school. Even if Ruby forgives Garnet goes to the boarding school, there’s no way that Garnet will know. So will the two twins make up and remember their friendship? Or will Ruby still be mad at Garnet? Find out by reading this book!

A friendship book I would say and the importance between twins or sisters or brothers. It’s kinda the same with friends. Well, see you next time.