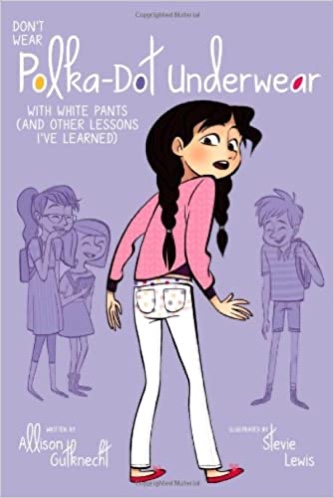 Hello everyone! Have you ever been out of luck? So has Mandy! Read this review to find out what it is all about!

Mandy has told her mother a lot of times, that the white pants are easy to get dirt on, and easy to fall on. And her mother has heard the same thing. But, does her mom listen? No! No Matter how many times she hears, she still insists that Mandy wears them. And just as Mandy thought, there was trouble that afternoon with the white pants. What happens is Dennis can see Mandy’s underwear! And he says she is wearing polka dot underwear, which is right! Now Mandy cannot wear her favorite underwear which is her polka dot underwear, and it is her lucky underwear! But then, something exciting shows up. Her class is hosting its very own Presidential pageant, and Mandy knows she will be perfect for the role of Goerge Whashington, since he was the first president, and Mandy is born first in her family, they got something in common, so it’s fair! But her teacher, Ms. Spangle assigned her for another role, and the boring Natalie gets the part to be Goerge wjashington. Mandy thinks it’s not fair. She has been practicing being Goerge whasington in her house, and she gives an exclamation mark when there is one, (which Natalie doesn’t do. She has a boring voice). She is being ignored at home, and she cannot be ignored at school too. If she has her polka dot underwear with her, she can get luck. But, Dennis knows she wears Polka dot underwear and if he does, it’ll be embarrassing since Dennis is her enemy . So she needs to make luck on her own. Will she do it?

I hope you enjoyed the book review a lot like I did!